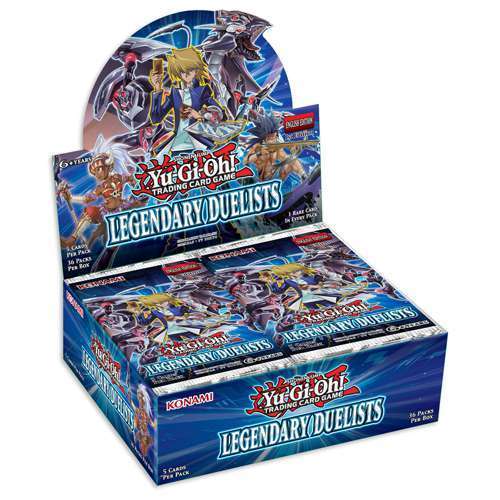 To reign victorious in the Duelist Kingdom tournament, Yugi had to face off against powerhouse Duelists like Mai Valentine, Mako Tsunami, and even his own friend and protg, Joey Wheeler! Now theyre all back with brand-new cards in Legendary Duelists, a booster set that powers up famous strategies from the classic series and beyond!
Joey Wheelers Red-Eyes Armory! Even the mighty Red-Eyes B. Dragon can use a boost sometimes! Legendary Duelists new Red-Eyes monsters are all about teamwork they can all Summon other Red-Eyes monsters, but some can also equip themselves to other monsters as Equip Spells, or equip other monsters to themselves as Equip Spells to power up!
Mai Valentines Amazoness Warriors! Mais Amazoness monsters excel at all things combat! Brand new Amazoness cards in Legendary Duelists add sneak attacks to their extensive repertoire of combat tricks, allowing you to Summon more monsters from your hand or Deck during the Battle Phase to tilt the odds of victory in your favor.
Mako Tsunamis Ocean Mastery! Youve seen The Legendary Fisherman and The Legendary Fisherman III. Now, the missing generation in the family will be revealed! This valiant warrior spent his life in search of a great whale that can surface in the middle of any Duel, and youll be able to find it in Legendary Duelists!
In addition, Legendary Duelists has brand-new cards to enhance the strategies of renowned Duelists from Yu-Gi-Oh! GX, like Zane Truesdale! Each pack contains 5 cards.
The complete set of Legendary Duelists is 51 cards: 27 Commons, 10 Rares, 7 Super Rares, and 7 Ultra Rares.